When your people are down sick and you can’t staff the job, will coronavirus excuse breach of contract?

In the case of Seitz v. Mark-O-Lite Sign Contractors, Inc., 210 N.J. Super. 646, 510 A.2d 319 (Law Div. 1986), a general contractor subcontracted for the restoration and replacement of a neon sign marquee on a construction project involving renovations to a theater.  The general contractor gave the sign subcontractor a deposit check, and they signed an agreement which stated in relevant part: "The Company shall not be liable for any failure in the performance of its obligation under this agreement which may result from strikes or acts of labor union, fires, floods, earthquakes, or acts of God, or other conditions or contingencies beyond its control."  This quoted paragraph is commonly known as a force majeure clause, from the French phrase for “superior force.”

Within a few days of signing the subcontract, the sign subcontractor discovered that its expert sheet metal worker, a diabetic, had to enter the hospital and would be unable to work for an unknown period of time. He was the only employee capable of performing the expert and detailed sheet metal work required.  The sign subcontractor called and advised the general contractor of the situation, and later returned the uncashed deposit check and offered to complete any part of the work which it was still able to perform.  The sign subcontractor also reached out to other sign companies, but when it was quoted prices thousands of dollars higher than its own price, it backed away from sub-subcontracting the services.

The general contractor found a replacement to perform the necessary work and later sued and claimed damages in the amount of the difference between the second subcontract price and the first.

The original sign subcontractor asserted the defense of impossibility of performance due to the disability of its expert sheet metal worker. Specifically, it urged that the illness of its employee discharged its obligation of performance pursuant to above-quoted force majeure clause.  The defendant contended that its employee’s disability was a "condition or contingency beyond its control," and that its obligations under the subcontract were therefore excused.

The reviewing court stated that the catch-all language of the force majeure clause was not to be construed to its widest extent, but was to be narrowly interpreted as contemplating only events or things of the same general nature or class as those specifically enumerated. The court said that the employee’s disability did not fall into the same class as that of labor strikes, fires, floods, earthquakes or war. Nor could it be termed an "act of God," in that the employee’s condition was not the consequence of a stroke or a heart attack, either of which might in a particular case be deemed an "act of God" because of its suddenness.  The stricken employee was a diabetic, disabled by a partial amputation of his foot as the result of the progressive aggravation of an infection, which aggravation was apparently rooted in his diabetes.  Such an affliction was not sudden, wrote the reviewing court, and the disability was a reasonably foreseeable consequence of his unfortunate malady. The employee’s incapacitation could not be classed an "act of God" by any logical stretch of the term, and the force majeure clause did not apply.

The court then noted that just because the force majeure clause did not apply, it did not necessarily follow that the affirmative defense of impossibility of performance was ruled out.  The reviewing court noted that the traditional rule with respect to impossibility by virtue of the death or illness of a particular person was well settled and relatively unchanged:

§ 459. A duty that requires for its performance action that can be rendered only by the promisor or some other particular person is discharged by his death or by such illness as makes the necessary action by him impossible or seriously injurious to his health, unless the contract indicates a contrary intention or there is contributing fault on the part of the person subject to the duty.  Restatement, Contracts, § 459 (1932)

The court went on to say that a more modern formulation of the doctrine is found in §§ 261 and 262 of the Restatement, Contracts 2d (1981), which speak in terms of "impracticability" rather than "impossibility":

The court went on to explain that regardless of which Restatement was adopted with respect to impossibility, the success of the defense in the particular mode asserted by the defendant sign subcontractor turned on a determination that the duty in question, as understood by the parties, could be performed only by a particular person. In other words, the issue was whether the subcontract was in the nature of a “personal services contract,” contemplating the peculiar skill or discretion of a particular person.  Where an agreement is silent as to whether a particular person is or is not necessary for performance, all the circumstances would need to be considered to determine whether the duty, as understood by the parties, sufficiently involved elements of personal service or discretion so as to require performance by a particular individual.

The real question was whether the duty of performance could be delegated to someone else.  If so, then the death or illness of the promisor or a third person who was expected to perform the actual work did not excuse performance.  For impossibility to operate as an excuse, wrote the court, it must be objective ("the thing cannot be done") rather than subjective ("I cannot do it").  On application of these principles the defendant sign subcontractor lost on its claim of impossibility of performance. Nothing in the language of the contract contemplated performance only by the disabled employee; nor did the circumstances demonstrate that the performance to be rendered by him was so personal in nature, calling for a peculiar skill or special exercise of discretion, as to make it nondelegable. The subcontractor admitted that the sheet metal work could still be performed through someone other than the disabled employee.  At best, its claim was that of subjective impossibility which, as was previously stated, is no excuse for nonperformance.

It made no difference that sub-subcontracting the sheet metal work would have resulted in a marginal profit or even a loss. The rule is that where a person agrees to do, for a fixed sum, a thing which is possible to be performed, he will not be excused or become entitled to additional compensation because unforeseen difficulties are encountered.  Judgment was awarded against the defendant sign subcontractor for the difference between the original and replacement subcontract prices.

Now you understand the general principles, but whether a coronavirus pandemic is to be viewed as a foreseeable risk in light of all the strains of influenza, zika, ebola, MERS, and swine flu to come our way in recent years, or is to be viewed as a bolt out of the blue qualifying as force majeure, remains to be tested in the courts.  Is this the end of the story?  No.  Your own force majeure clause should be revised for the next time you use it, to include the kinds of risk that modern times have thrust upon us all.  If your next contract relies on a particular worker, your special conditions of the contract should be drawn to manage loss of that employee.  While Seitz v. Mark-O-Lite Sign Contractors, Inc. discusses the relevant issues in terms of labor and services, determination of a case hinging on unavailability of materials or equipment may find a different expression.  Only when the supply chain snaps will many of us find out where we stand in the eyes of the law.

As a parting shot, if you’re expecting leniency for the COVID-19 coronavirus disease from the owner on a public job, open your eyes with a look at the 2006 US Department of Commerce clause CAR 1352.218-70 <http://www.osec.doc.gov/oam/acquistion_management/policy/procurement_memoranda_cancelled/documents/PM_2007-01.pdf>, ”Contract Performance During Pandemic Influenza Outbreak, SARS Outbreak, or Other Biomedical Emergency or Catastrophe,” ordered at the time for incorporation as applicable into all then-current contracts.

As always, let me know if I can help. 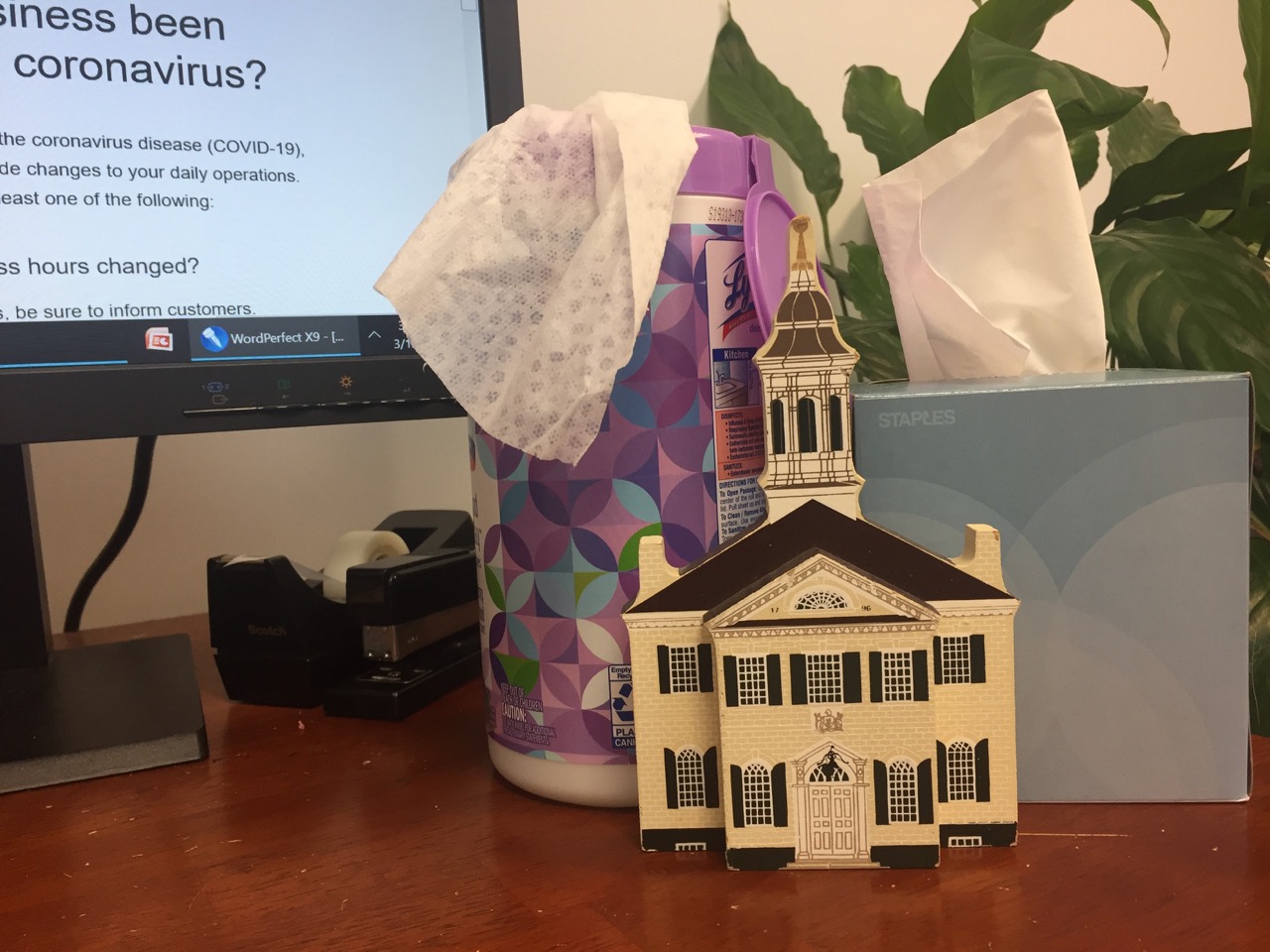