Every couple of months, somebody asks me if they can fire their contractor. My answer is always, “Yes! Absolutely!” When his or her face brightens I always add, “That doesn’t mean you won’t get sued for it, though.”

When you fire a contractor without paying her price in full, you breach your contract. When you breach an enforceable contract, you can be sued for it. While you can be sued whether or not you have an excuse for not paying, you can only lose the case if your excuse is no good under the law.

You can get away with firing a contractor without full payment when the contractor herself has breached a “material” term of the contract. The contractor’s major breach is your good excuse. “When there is a breach of a material term of an agreement, the non-breaching party is relieved of its obligations under the agreement.” Nolan v. Lee Ho, 120 N.J. 465, 472 (1990).

Be careful, though. There are major breaches and there are minor breaches of contract. A couple of nail pops in the finished drywall will be unlikely to support firing a contractor off the job and not paying her. Nail pops will constitute a breach of contract by substandard performance, but they will most likely be viewed as a minor breach. The remedy for a minor breach is an offset to the contract price or otherwise for money damages, usually in the amount required to correct the shortcoming. A minor breach will not excuse firing your contractor.

How do you spot a material breach? Many times it’s a judgment call. Some of the factors that are viewed as significant in making that determination are:

Still not sure what to do? As in most such cases, the best next step is to ask yourself if you went to law school. If you can’t honestly answer yes, you should call a lawyer before firing your contractor.

Bob Incollingo was voted the Best Attorney at Law in the Courier Post Readers’ Choice 2015 Best of South Jersey poll.

The Law Office of Robert J. Incollingo has been selected as one of the Best Attorneys in Business 2015, by SJ Biz Magazine, in the category of Construction Law. 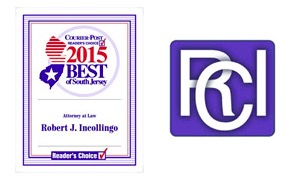