What if chocolate and vanilla were the same color? That’s kind of where you are with major and minor breaches of contract on a work of home improvement. If you didn’t get out of bed this morning with a law degree, a minor breach and a major breach can look exactly alike. The difference between the two is more than a simple matter of taste, though; telling one from the other is crucial, since a major breach allows the non-breaching party to walk away from further performance. A minor breach does not; you’re still locked in until the work is finished. Make a wrong call and you’re the one who’s finished. If you, a home improvement contractor, quit a job without the legal right to do so, that’s going to be judged as abandonment of the work, a major breach of contract on your part, and consumer fraud to boot. See, N.J.A.C. 13:45A-16.2.7.

So, for example, if your customer disputes the percentage of completion on a particular draw request and won’t pay, or if she refuses to cut a check until all the nail pops are fixed, do you have good grounds to walk off the job? It absolutely depends.

As always, you can lessen your business risk of a bad situation with a little thought given to your home improvement contract. Better to do so before you find yourself defending your business on nuanced facts. Add a separate clause on Owner Breach in the general conditions of your home improvement contract, and define a major breach as any breach which continues for a period of time after notice of breach is given. Courts love notice – it feeds the need for procedural fairness which gives them a reason to exist. Outline the reasonable steps which you will take to address owner breach and enforce your contract rights. Done correctly, this will tend to give you the edge in any dispute that goes to court. Better, it will tend to raise your customer’s consciousness in a good way, providing an incentive to act reasonably so that problems don’t reach a breaking point.

11. Owner Breach. The Owner breaches this Contract by failing to make any payment when due, and/or by failing to abide by any other obligation which the Owner has under the Contract Documents. If a breach of this Contract by the Owner continues without cure following written notice for more than five (5) days in the absence of an agreed, signed Change Order allowing an upward adjustment in the Contract Price to compensate Contractor for increased job costs, which may include direct and indirect delay damages incurred due to halted Work, and interest on late payments as hereinafter provided, and an adjustment in the Contract Time as required, the same shall constitute a major breach of contract by the Owner. Contractor may then stop the Work until all past due amounts and accrued interest have been received and all other Owner obligations have been performed, or terminate the Contract and recover from the Owner contract damages, attorney’s fees, costs of suit, and prejudgment interest on the unpaid balance of the due portion of the Contract Price from the due date until paid at the rate of 2 percentage points above the prime interest rate then prevailing at the general location of the project, or the maximum rate allowed by law, whichever is greater. The remedies provided for in this paragraph are cumulative and shall not prevent Contractor from exercising any other right it may have in law or equity, including its rights under the construction lien laws of New Jersey.

Couple your owner breach clause with another clause that provides a way to address minor disputes (which you can find by reading General Conditions of the Home Improvement Contract: Minor Disputes), and you’ll be glad you did. Since the New Jersey Home Improvement Practices Regulations require that all terms of a contract over $500.00 be in writing, the parties’ respective rights and obligations should always be stated clearly in black and white. 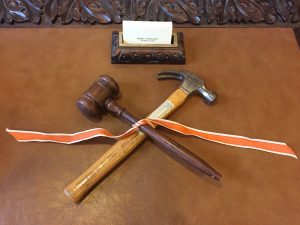